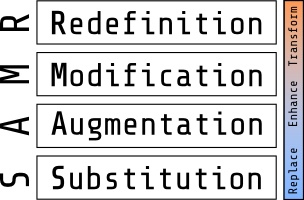 Many people are looking to incorporate technology into their classrooms.  With the power of mobile devices rising and the cost (generally) decreasing, this is a reasonable and worthy goal.  However, in order to make the technology work in a pedagogical manner, there should be some strategy involved.

Around 2008, Ruben R. Puentedura developed the SAMR model.  SAMR is an acronym for Substitution, Augmentation, Modification, and Redefinition.  This system determines how technology is applied in the classroom.  Dr. Puentedura offers information on his website, http://www.hippasus.com/.

The determination of where a particular tech tool is placed in this system depends on its usage.  I’ll describe the categories using Google Docs as an example.  This tool is essentially a word processor available from Google, with significant improvements over a stand-alone product.

Substitution is essentially a one-to-one replacement of a non-tech device with some form of technology.  In this category, using Google Docs only as a typewriter to replace pen and paper would be a substitution.

Augmentation makes use of the tech tool and enhances the replacement with some type of functional improvement.  It is more likely that Google Docs would be considered an augmentation of pen and paper, because students could move bits of text around easily.  The use of spell check would also be an augmentation.

Modification changes the task significantly.  Traditional word processors would require that students save their work and send it off to their partners.  At some point, the students would need to sit down together and discuss the modifications, and then implement all of them into a final version of the report.  Google Docs create an online file that students can access and modify.  Partners can each modify the file, and changes are saved immediately on Google’s servers.

Redefinition allows for changing the task in major ways that would not be possible without the technology.  For example, Google Docs allow students to share their work with each other and the instructor.  Whereas previously, students would need to e-mail their work back and forth to each other, Google Docs allow students to simultaneously work on a report.  Each student sees the modifications that their partners are making.  Using the chat function, students can communicate to each other while working on the file at the same time.  This collaborative process would not be possible without the addition of the technology.

The next time you find an app, think about where it falls in the SAMR model.

I offer seminars and workshops to help you or your department learn more about the SAMR model.  We can discuss web tools and mobile applications that can help transform your classroom.

Do you have any questions or comments about the SAMR model?  Post your question in the form below.